You will find here some ideas for visiting the island during your stay:

Most downtown buildings have more than a century and was erected during the first period of prosperity from the exploitation of tin. Their architecture, which is called Sino-Portuguese, is a mix of Chinese and Western influences. This style is also common to all coastal areas of mining on the Malay Peninsula. The historic center is located on Thalang Rd axis (with the pretty “soi” Rommani) and Phang Nga Rd.

Thalang Rd got a complete renovation and the Phuket authorities had the good idea to hide in the pavement the frightful electricity and telephone cables that distort the streets of Phuket (unfortunately in all the cities of Thailand). Phang Nga Rd has not yet been renovated but worth the visit for the On On Hotel where was made the movie "The Beach" in 2001 with Leonardo Di Caprio. 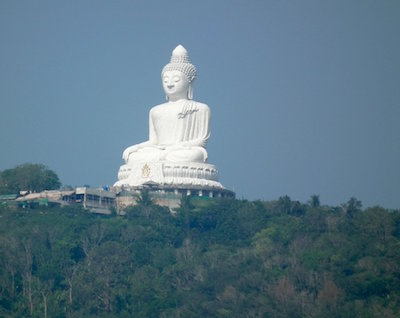 Located at the top of a hill (350 meters high) between Chalon Bay and Kata Beach, Phuket Big Buddha offers a 360 ° view over the South of the island (Chalong Bay, Cape Panwa and Phuket Town), over the Eastern (Rawai and the Promphep cape) and over the West (Kata Noi bay, Kata and Karon).

You can access via a rather steep road that offers lovely views of Chalong Bay and Karon beach. You will find some restaurants where you can admire the scenery while enjoying delicious Thai dishes. On clear days you can even see Phi Phi Island about 40 kilometers in the South-East. The statue is about 45 m high. This is one of the most popular sites of Phuket. 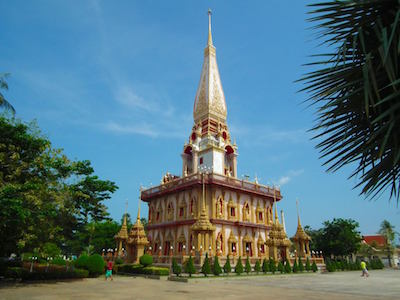 It is the largest Buddhist temple in Phuket. Its architecture is typical of the temples in Thailand. Wat Chalong is associated with two revered monks, Luang Pho Chaem and Luang Pho Chuang, who were famous for their work on herbal medicine. During the rebellion of the tin miners in 1876 they mobilized relief assistance in both camps, became the mediators and bring the two parties to meet and find a solution to their conflict. Their commemorative statues are erected in the temple. Many Thais go there to receive the blessing of the monks and a lucky string tp knot around the wrist. The large marble chedi located deep in the park contains at its summit a sacred relic of Buddha in a glass globe. A staircase leads to it. Beautiful views on the hills around and the Big Buddha. 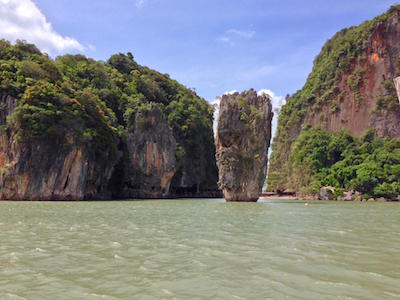 Phang Nga Bay is a 400 km2 bay located between Phuket Island in the Southwest, the province of Phang Nga in the North and East of Krabi. Phang Nga Bay is often compared to Halong Bay in Vietnam (Halong Bay is wider than Thailand but less sunny and often in the mist). The best way to discover this magical place, known for its 300 limestone peaks surrounded by mangroves, is by canoe or long tail boat. Some peaks can measure more than 100 meters high. One of the peaks is crossed by a navigable cave at low tide, his ceiling studded with stalactites.

Further, we discover Koh Tapu (literally the island of crab eye), more commonly known as James Bond Island, famous for the James Bond film “The Man with the Golden Gun” in 1974. “Tomorrow never dies’” another James Bond film was realised in the bay in 1997. This island consists of a single rock twenty meters high like a nail driven into the sea. 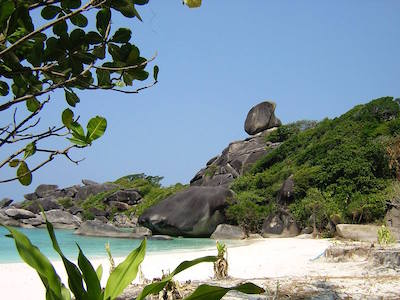 The archipelago of the Similan Islands is located approximately 100 km Northwest of Phuket island and 65 km of the continental coastline, almost in front of Khao Lak. The archipelago consists of a set of nine granite islands covered with lush tropical vegetation. The sight is fabulous and unforgettable. Small withe sand beaches are bordering the islands. The seabed is also essentials with the most beautiful spots in the world for diving. If heaven exists, hope it looks like this.

To learn more about